Growing up with her aunt and uncle wasn’t always easy for Malee, but it provided her the stable life her parents knew she needed. They were not around enough, due to the many companies they built all over the world.

Her aunt and uncle worked hard to care for Malee and her cousin. Making sure they always had what they needed and stayed safe.

Having a background in an agency called the SIA, uncle would train them both in various forms of martial arts, infiltration and investigation, and even disappearing if necessary. His knowledge wasn’t known to many, no one other than those of the SIA and his wife. But that knowledge was dangerous and he had to endure this family could protect themselves.

Although now disabled, uncle was an excellent teacher, knowing just how far to push them, making them not only masters in their arts but also love it.

One day, at the ages of 9 and 10, Malee and her cousin were on their way home from school. Mother and Father always sent for a car to pick them up, that was their effort in parenting but Malee knew it came from love. As they rode home, cousin saw a couple being attacked behind a building. Immediately she yells for the driver to stop, but he refused. His order was to get Malee home safely, and that situation was far too dangerous. Infuriated, she jumped out of the car at the next stop and ran to the defense of the couple.

As she ran to them, they lay there unconscious, the attackers still attempting to loot them. Knocking one of them to the ground, cousin grabs the woman by the hand, but suddenly darkness…

Malee stood there, motionless as cousin drops to the ground and one of the attackers stands over her with a knife. Everything blurry and suddenly in slow motion…

*BANG BANG*
The sound of the driver shooting the attacker snaps Malee back into focus and she runs to cousins side feeling completely numb.

The death of cousin hit the family hard. None of them able to face the loss of someone so precious to them.

From that point Malee trained harder than before vowing in her mind to help whenever she could, wherever she could.

The Aunt and uncle worried about Malee, realizing her drive, knowing she pushed herself with no limits. Deciding to support, rather than object to Malees pursuit for Justice, aunt and uncle began to show Malee more, sharing more knowledge and skill sets, showing they were no ordinary couple. Finally revealing just how they knew so much.

They worked for The Company before the beginning of the “the cleansing”. Uncle, having worked for the division SIA, had extensive experience with secret missions, hand to hand combat and off the record ops. Aunt was part of the weaponry development division, making her an expert in mechanical engineering, chemistry and much more. They became aware The Company was working to develop weapons that could cause global disaster and they refused to be a part of it. Leaving The Company did not come without cost, they knew too much and was a liability. Unfortunately for The Company, aunt and uncle were very well trained.

At the age of 18 it was time, Malee now surpassed any of uncles skills and was ready to begin defending those that needed it. Setting up a base in their home, aunt and uncle made sure she was not doing this alone and ensured she had all the necessary gear and protection needed.

One night while following up on a lead, Malee was ambushed and left for dead. Aunt arriving to her aid, administered a serum they took from The Company, developed to induce accelerated healing. While it did just that, it also left Malee with above average strength, speed, sight and hearing… 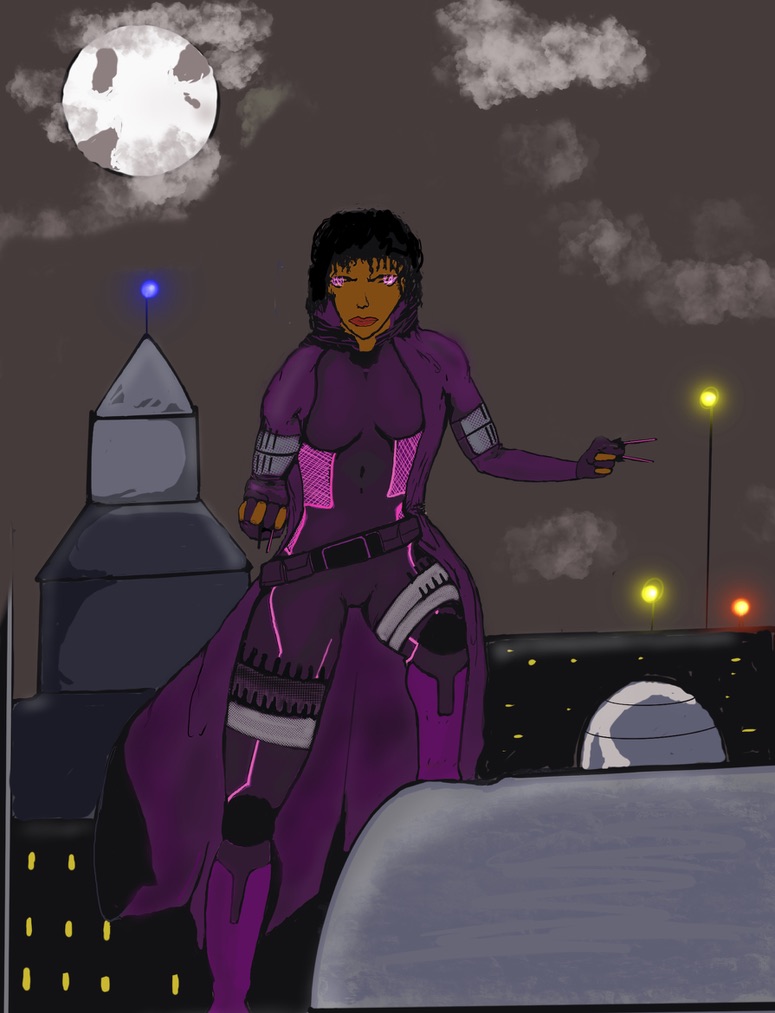